skip to main | skip to sidebar

How would you rate this article

The Creation Hymn: An Avesta-Veda commonality

One of the hidden gems of the Zarathushti faith is a reference to the creation of the universe using scientific terminology relevant to the latest advances in Science.


This is the Mantra of CREATION:

Rao-chey-beesh roi-thu-ven khw-aa-thraa
Thoughts, like packets of Light, streaming out in radiant glory, Reverberating at the dawn of Life

Yaa daa-ra yat vahishtem mano
That universe supported by thy cords (reins) of Love & Compassion, flowing down to us, enabling us to commune with thee;

This mantra defines the nature of our Creator, the basis of his power & the way in which the universe was created. Each of these has an expansive & complementary echo in the Rig Veda as elucidated below.

1st Verse: In the Void of nothingness, One being, the self created (Ahu-ra); arose, by its own power. With his “churning stick” (Manta), A reverberating sound was generated at the dawn of life, creating matter (Universe) , with a burst of energy (heat & Light)

Complementary sentiments in the Rig Veda:
X.129,1:
In the beginning, when there was no before;
There was neither the Existent (Sat’) nor the Non-Existent (A-sat’);
Neither air, the sky beyond, nor the heaven

No protection by anyone, only shadowy unfathomable waters, concealed by shadows.

X.129,2
There was neither death nor immortality (A-mrutam),
No beacon of light to distinguish between night & day.
In this nothingness, One arose, the Asu-ra, en-wrapped in the void; Breathed, windless, by its own power.  Other than that there was nothing beyond.

X.129.3
In this Ocean of indistinguishable watery nothingness, covered in Void,
That One being (tan) arose through the power of heat (tapa-sas) ; by its own propulsion.

Nature of the Creator:
The Creator is addressed as “Khwatr” (Vedic Savitr): The stimulator of Intellect

(The Vedic root word “saa” or “swa”, becomes “Khw ” in Avesta, meaning “radiant, glorious”. The ending “Tr” in both avestan & vedic, stands for concentrated light like in a star)
Thus the vedic “Savitur/Savitr”, the Stimulator of life & motion on this earth , & of human intellect ; the power controlling the bright Sun & the Universe; is none other than “Khwtr” (later called Khursheed Yazad) of the Avesta. (Here Khur = Khwr  (radiance/intellect) + Sheed (Vedic Shweta,) meaning  bright white.)

Khur-asan, the eastern also derives its name from khw-ar (radiance)+ aas-an (thunderbolt); the place which is drenched by sunlight first; from where the Sun rises-the East.

The Vedic “Swa-dha”, similarly becomes Khw-da/Khu-da, (Ys.29.11) from which the word God-the Self existent, creator & stimulator of all life is derived. Note that the Avestic term "Da", cognate with the Vedic term "Dha" means rule (of the Lord) through wisdom.

Similarly the famous Vedic Sage Kavi Sush-ravah is none other than our Kavi Kai Khosrau.

Devoted invocations to that supreme intellect, who propels the Sun & the cosmos, follow an almost verbatim similarity in both scriptures, as can be seen below. 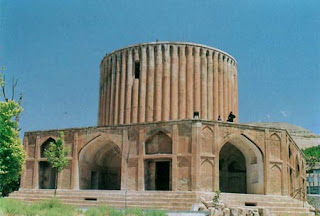 Temple dedicated to Khwa-tr in Kashmar.


Khursheed (Khwatr) Neyash:
“We revere the Glorious Sun, the visible, shining symbol of thy immortal Power & Glory; to withstand the forces of darkness, for deriving strength of spirit & alertness of mind. Through it, we, on this Earth & all thy creations get purified (sins are absolved, through genuine remorse & corrective actions). May we be inspired & illuminated by the immortal light of thy Sun, whose rays, like powerful horses, travel at wonder speed.

This imagery of thousands of horses, like packets of Light, raining down on men & stimulating their intellect, implied that knowledge (Truth), like horses had to be conquered. Gaining  Knowledge was therefore termed as winning the Light. The focus of worship was therefore not the forces of nature, as some detractors would have us believe, but of that Great Intellect  (Ushtrem detailed in Yasna 44.18) who had created the Universe & controls its functioning. The liturgical offerings are merely an outer symbol of an inner communion (Darsh-naa) between Ahura Mazda & man. Man giving what he processes (selflessness) & Ahura Mazda gifting the herds (horses) of light; these symbols of strength & perseverance required for winning the battle against the forces of deception, ignorance & darkness

Gayatri Mantra:
We meditate on that Creators’ Symbol, the Sun , the glory who has created the universe, who is fit to be worshiped; who is the embodiment of Knowledge and Light, who is the remover of all sins and ignorance. May he illuminate our entire universe's intellects.

This mantra, believed to have been composed by Sage Vishvamitra, is said to be so ancient that the four Vedas were said to have been derived from it.
The Gayatri Mantra must be recited by all 'twice-born' (navjyot initiated) Hindus, especially the Brahmins , (Priests) who are expected to recite it every morning and evening. It is said that the recitation of the Gayatri five times a day (as is the Ahunawar in Zarathushti Dae-na) is as effective as performing the pancha-maha-yagya (the 5 great sacrifices).

In ancient times this initiation occurred at the age of fifteen. One may note that Nav (new) Jyot (flame/birth) implies that the child has acquired the ability to reason & is therefore responsible for all future actions. In effect having been “reborn” as an adult with due rights & responsibilities.

The clear implication here is the independent choice to intelligent & spiritual advancement, as opposed to submission & blind conformance to the dictates of another.
This sentiment is echoed both in the Tir Yasht ,13-14 and Vandidad 18.54.


Our Sadra & kusti, the garments which define & broadcast our religious & ethical affiliation have been defined in the Vedas.

In RigVII.33.9, 12, Sage Vasistha is referred to as wearing white vestments spun by Yama (Avesta Yima) and brought to him by Apsaras (angels). Vashishta was also known as Maitri-Varuni (son of Varuna & Mitra).


A paper presenting technical evidence concerning a newly discovered bronze idol (in Balkh-Margiana) states, " The life sized head has a hair style which the Vedas describe as being unique to Sage Vasishtha, one of the Rishis who composed parts of Rig Veda & Yoga Vashishta. Carbon 14 tests indicate that it was cast around 3700 B.C., with an error in either direction of upto 800 years .. an age also confirmed by independent metallurgical tests" (J. of Indo-European Studies, v.18, 1990, p.425-46).

These vestments of the Vasisthas (Avestic Vahishtas) tribe are twice referred to as wearing what Griffith translates as “white robes” (Rig VII.33.1; 83.8); the Garments of Parsi Mobeds to this day.

This ancient heritage is confirmed by the artifacts excavated in Dashli (Balkh-Margiana Archeological complex). A vase in Dashli shows a scene with men wearing a kind of shirt leaving one shoulder uncovered; indicating possibly the original sadra design, made out of a one piece uncut cloth.


The yugno-pavit or the holy thread for the Hindus is an  initiation ceremony, which traces its origin to Vedic history.  Three strands of the holy thread represent three-fold properties of energy viz. creation, destruction and preservation. The three outward symbols: Sudra, Kusti & Cap correspond very closely to the Hindu Yajno-pavita (the Sacred Thread), the Mekhala (the Girdle) and the Shikha (the tuft of hair on the top of the head) respectively


2nd Verse (Yasna 31.7) :
The rhythm of this Ever Expanding Universe (recently confirmed by the discovery of an ever accelerating Universe) was instituted, through a universal cosmic law (Asha/Rta) that ensures a natural order regulating the matrix patterns and processes of all manifest things (the orbit of planets, seasons, day & night etc). . Everything is attuned (connected) to everything. Each part is uniquely aligned to the the whole & the Whole moves as a sum of all the parts.
All are connected in a subtle way. All are a part of a whole……none are apart.
Just like the different systems in the human body (Circulatory, nervous, muscular etc) function independently, yet are inseparable from & critical to the functioning of all other body systems, this law, Rta/Asha symbolizes the inherent rhythmic unity of the universe. Asha/Rta also bears an ethical aspect: It governs human behaviour by treating virtue as a part of the natural order. It is thus addressed also as Truth & Reality, or the Pure Existence (Sat’)

From the creation hymn in the Rig Veda: “In the artifice of eternity, nobody can differentiate the dancer from the dance.
For all are governed by Rta ………..the Rhythmic Order of the Universe.”

Asha is therefore the Universal Law, which governs the functioning of the universe; the path of Integrity, Duty (responsibility) & Justice, which can only be achieved through ethical intellectual probity; Knowledge (of the functioning of the Universe & understanding the mechanics of life & the purpose of existence).
Knowledge, after all, as all Quality management professionals know, like Asha, has to be a continuous improving spiral.

“ Ushta Aahmaai Yaa aahmai Ushtai Kahmai Chit”
Only those actions based on intelligent inquiry, & analysis of options, that would best serve the interests of ALL, can be the harbinger of happiness.”
Thus exemplifies what we call the * That Law of consequences:
My destiny is merely the consequences of my present actions.

Prisni 10-5 of Sri Ram: .
“Enlighten us about The Truth, that which is The conqueror of all, The sustainer of all, The architect of all, & One who deals Justly.”


3rd Verse:
Ahu-ra, the Almighty Creator is described, now, as a “Vah-ish-tem Mano”, the Greatest, most Loving & Compassionate Mind. He is Love personified & the epitome of high mindedness. He conducts the functioning of the Cosmos (A-sha), much like a charioteer, with Cords (Bandhan) of Love & Compassion which extend from the highest heavens.

He is also addressed as “Mazda (Maz + Daa): Maaz/Maah-=Great +, Da/Dha* = one who rules through Wisdom), protector of mankind, source of the splendorous Light (Noo-rem) of knowledge & Perception/Insight (Chisti) for mankind, removing the darkness of ignorance.
• Dha, after all is the root word from which other words such as Dharma are derived.
• The natural meaning of dhi which corresponds to the later word Buddhi; means thought, understanding, intelligence


Vahishtem Mano, also called Vohu Manah; finds an echo as the Vedic Vyo-man: the highest heaven. However, whereas its mention in the Vedas is very brief, its theological attributes are found deeply detailed in later scriptures such as the Bhagwad Geeta, clearly indicating the Gathic source of its inspiration.

From: Vedic Reader by A Macdonell:
Rig X.129.7: Whence this Creation has arisen, whether he founded it or not, he who in the highest heaven (Vyo-man) is its surveyor, he only knows, else he does not.


Scientific Validity: The String Theory; which identifies the fundamental building blocks of matter & explains the laws of the Universe……..the theory of interconnection between everything…………The Unified Theory.

The String Theory (& its variants) postulates that the shape of that infinitesimal, fundamental building block of life (& the universe), is that of a `string'. These strings, which can be open, closed, or looped, (like DNA) “vibrate” with a sound & color (“fingerprint”) unique to the particle type. One mode of vibration, or `note', makes the string appear as an electron, another as a photon.

According to the string theory , the strings (cords) that make up particles & other forces of nature are attached to our universe . Gravity is communicated to our Universe from an external cosmic source (the brane) separated from us by a fifth dimension (time being the fourth).

From: Vedic Reader by A Macdonell:
Rig X.129.5: The bond between the existent & the non existent, like cords extended across the universe; were impregnators, reservoirs of power, of energy & impulse.
Posted by Vyoman at 9:29 PM

Has this inspired faith in the Zarathushti philosophy